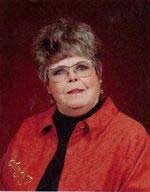 (The Nebraska Society was recently notified of this member’s death).

Funeral Services for Donna L. Hardin, 71, were conducted from the First Baptist Church in Oxford on Dec. 1, 2006 with Pastor Dave Hunt, officiating. Interment was at the Oxford Cemetery. She died Nov. 28, 2006 at Holdrege. She joined the Nebraska Society in 2002 and was a descendant of Pilgrim John Howland.

Donna was born Aug. 11, 1935 near Lebanon, the fifth of six daughters of Francis “Lloyd” and Elsie (Gay) McCashland. She received her primary education at Lebanon and graduated from Lebanon High School with the class of 1953. Following her education, she was employed by the Goodall Electric Company in Ogallala.

On July 3, 1954 she was united in marriage to Richard Meader and to this union four children were born: Terreen, Bradley, Pamela and Shari. The family made their home in Ogallala until moving to Oxford in 1959. In 1968, Donna owned and operated Donna’s Dime and Dollar Store until she converted it into a Floral Shop in 1971. On Aug. 15, 1981 she was united in marriage to Rodney Hardin. The couple made their home in Oxford, where Donna continued to operate the Posy Patch Floral and Giftsand they also operated the Mule Skinner for several years.

In 1995, Donna retired yet remained active in the community. Donna was a member of the First Baptist Church, where she was active in the Joy Circle, member of the Birthday Club, Wednesday Club, Leisure Hour, the Silver Threads Pinochle Card Club, the Hustler Club and Mrs. Jaycee’s. She also served on the Golden Generation Center Board of Directors and the Thrift Shop Board, where she was currently serving as treasurer. Donna enjoyed crafts, golf, dancing, playing pinochle, collecting dolls, working with flowers and first and foremost loved spending time with her grandchildren and great-grandchildren. She also painted murals on the classroom walls and made banners for her church.

Besides her husband, Rod she was preceded in death by her parents; one daughter, Terreen “Terre” Blue; one grandson, Aaron Blue; four sisters: Glenva Orvis, Mildred O’Hare, Betty Orvis and Vada Huntsman; and two brothers-in-law: George Orvis and Samuel Huntsman.

Congratulations to these members on approval of supplemental applications:

The Nebraska Society’s application fee increases to $90, up from $45, on Jan. 1, 2009. Final applications submitted to Plymouth after this date will require the higher application fee.

But there’s still time to join at the lower rate, if the final application can be submitted prior to the Jan. 1 date. Contact the state historian at mwbeerman@cox.net for more information.