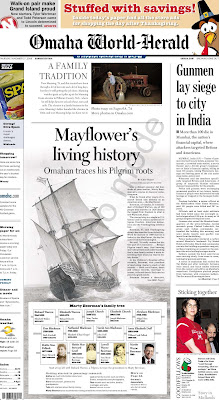 Omahan traces his Pilgrim roots
BY CHIP OLSEN WORLD-HERALD STAFF WRITER
Like a distant ancestor did hundreds of years earlier, Marty Beerman set a course to discover something new.
What he found after years of research linked him directly to an American icon – the Mayflower.
Beerman, of Omaha, is a descendant of Richard Warren, one of 102 people who traveled in 1620 aboard the vessel from England to what is now Plymouth, Mass. The storied ship is a staple in U.S. history and for many a symbol of religious freedom, American democracy and the Thanksgiving celebration.
Beerman, 47, said Thanksgiving always has been his favorite holiday. When he learned in 1989 that he is linked to the Mayflower, the day became even more meaningful.He said, “It really makes the history part of it come alive. . . . Being a Pilgrim wasn’t easy. Just knowing more about them and understanding that’s your family makes it more interesting than what you read in history books.”
In his Children’s Hospital office recently, Beerman, vice president of marketing, shared a stack of old records – birth certificates, death and census records, marriage licenses, wills and deeds. Each one is a piece in a giant puzzle.
Beerman became a detective, searching for clues to connect the dots of his family history. He built his case one generation before another.
“You start with what you know,” Beerman said. “Then work your way back.
“But discovering that his roots led to New England and the famed ship was a surprise.
After his grandmother died in Iowa more than 20 years ago, Beerman’s interest in his ancestry kicked in.
Through his search, he found that his family slowly migrated from New England to the Midwest. As he researched, he found himself plotting the reverse course, following one ancestor at a time on a path back to New England and eventually to the Mayflower itself.
One way he marked his discovery was personalized license plates that read “1620” on one car and “Pilgrim” on another.
Along the way, he discovered many other family tales.
One relative served as a soldier in the Revolutionary War, later receiving a pension of $8 a month. Pension records, which often listed descendants, were a valuable source of clues.
Other relatives, he found, served in the Civil War and the War of 1812.
Such details help make the past pop.”When you can frame it in terms of those events, for me, it makes history more interesting,” said Beerman, who graduated from Creighton University with a journalism degree.
He said his wife, Jane, often jokes that in nearly two dozen years she has never spent a vacation that didn’t involve visiting a burial ground. The couple have two teenage children.
Cemeteries often offer worthy tips.”You’re looking for graves,” he said. “You’re looking for families.
“When lucky, he would find three or four generations together in one spot, providing valuable clues to the step in his journey, he said.
It’s important, too, for him to keep a record for his own descendants. In several hundred years, his relatives might find this work useful, he said.
“You’re documenting this for a future generation,” he said.
He also helps others trace their family history and find links to the Mayflower as historian for Nebraska’s chapter of the Mayflower Society.
It’s much faster and easier now with the Internet. His ancestral search – done before the computer age – moved like a crawl compared to what now can be found with a click.
During his own search, he often traveled and wrote hundreds of letters.
All 50 states, the District of Columbia and Canada have established society chapters to honor the Mayflower’s passengers and their roles in American history. The society is based in Plymouth.
Paul S. Bumpus, the society’s historian general in Plymouth, said estimates put the number of Mayflower descendants in this country between 30 million and 40 million people. Most, he said, simply are unaware of their connections.
The society offers membership to people who prove a line of descent from at least one of the 29 Mayflower passengers who left descendants.
Bumpus, who had 22 family members on the ship, said the society has about 27,000 active members and about 80,000 throughout its existence. It was founded in 1897.
Nebraska’s chapter has about 300 members. Iowa’s has more than 360, many of whom are from the western edge of the state, said Ruth M.F. Tucker, Iowa’s chapter historian, who had five ancestors on the ship.
Beerman, Bumpus and Tucker all can trace their families to Richard Warren, making them distant cousins. Others with more famous names who descended from Warren include Ulysses S. Grant and Franklin D. Roosevelt.
The passengers boarded the Mayflower in September 1620. They reached their destination in the winter. The harsh weather contributed to many deaths and struggles as some created a colony at Plymouth.
Some passengers left England to escape religious persecution. Others looked to build new lives separate from the church. Many were likely frightened, cold and lonely. But all were bound together, traveling to an unknown land and an uncertain future.
Beerman tries to keep that in mind.”An interesting thing to remember is that these people were just like us,” he said. “They were just trying to survive.”
For the sidebar graphic:
http://content.omaha.com/media/maps/graphics/1127tree.jpg
Who was Richard Warren? You know his descendants:
http://omaha.com/index.php?u_page=2798&u_sid=10499184
More Information:
http://omaha.com/index.php?u_page=2798&u_sid=10499451

A descendant of Pilgrim John Alden, he joined the Nebraska Society in 1975, and served as Governor from 1984 to 1986. Services at Ithaca United Methodist Church; interment at Indian Mound Cemetery, Ithaca.

A descendant of Pilgrim Richard Warren, Florence joined the Nebraska Society in 1949. At the time of her death, she had been a member of the Society longer – 59 years – than any other current member. She had previously served as Society secretary.